Home
Graphics
The Design Process of One Book Cover

step by step process of a book cover from concept to completion.

Back in 2003 I was contacted by friend and author, Jay Humphreys, saying that he had just written his first novel and would like me to create a cover for it. The transcript arrived a day or two later and I read it immediately. It was a very visual story, so this was going to be fun. It was called Uncle Sam's and set it in the 1930s in St. Augustine, Florida.

After having another discussion with Jay I started producing sketch proposals. I sent them to Jay and discussed them on the phone later. I seemed to be off target. He had previously discussed an Art Deco style and this came up again. He mentioned simple shapes and symmetry. Then I realized a question I should ask..."Do you want it to have an Art Deco feel, or do you want it to BE Art Deco?". The answer was a resounding yes to making it an actual Art Deco piece. 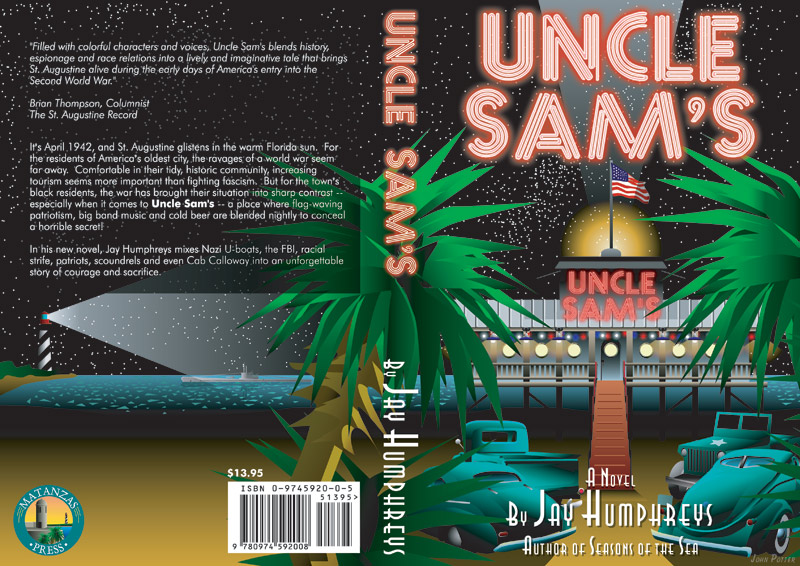 The last two book covers that I had done that had received a lot of attention were oil and acrylic paintings, so I think I had jumped to the conclusion this was the direction Jay wanted to go. Jay had known me for quite some time though, and he was probably thinking back more to a project I had worked on with him many years ago about Florida's Biotechnology. It was an Art Deco piece designed in Adobe Illustrator.

He was right. Art Deco would be perfect and the concept that became the final cover almost crystallized in my mind at that instant. By the next day I had a new comp to him.

All those previous sketches turned out to be helpful. I had a very good feel for the layout of the scene as a result and I sped along quickly. The first comp may look fairly finished here but at the 300 dpi required for print it had a long way to go, plus there were a lot of details to flesh out, like multiple types of cars in the parking lot and the entire back cover. Parts were low resolution bitmaps slapped on with Adobe Photoshop, but it was enough to show Jay for a proof of concept.

Jay liked it and from there it was just many hours of drawing with Adobe Illustrator. It was great fun, and we were both very pleased with the results.